Cure is a researchable ability for the Meric unit. 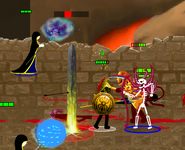 Often in the time of battle, your troops can get poisoned by Magikill, Medusa, Shadowrath, Scorplings, or a hoard of Deads. And once you get poisoned, it can deal a lot of damage over time, especially on Order units such as Archers. Your men might kill all of the enemy, but they will soon die as well if they aren't cured. Cure, a technology exclusive to Merics, lets you get past the hardship of Poison without having to go back to the Castle. Instead of Healing another unit, a Meric will perform Cure, in which yellow (instead of the normal green) pluses "cure" the infected unit from poison. The unit no longer will lose any health from the DoT!

The ability can be toggled on or off, but merics do not attempt to cure unless an allied unit is poisoned so they do not waste time curing non poised units if you leave the cure enabled.

However, merics will target the same unit and attempt to cure it multiple times if the merics are allowed to cast cure at the same time, so moving merics around to 'desync' them is necessary for effective curing.

Community content is available under CC-BY-SA unless otherwise noted.
Advertisement